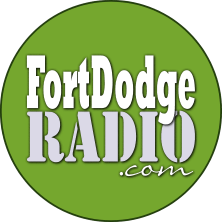 Fort Dodge Radio is a commercial Internet radio station streaming from Fort Dodge, Iowa. The station streams an all-music format with a mix of the MTV '80s era with classic rock and pop hits of the '70s.

Locally produced shows by Fort Dodge Radio include the Indie Music Room hosted by Heather Kelly. The Indie Music Room features interviews with independent artists and they talk about writing, recording, and performing their original music.

Fort Dodge Radio is the first commercial radio station in Fort Dodge to be exclusively streaming all of it's radio programming.

Bill provided his leadership to many local, state, and national organizations and served as President of the Iowa Broadcasters Association in 2001.

Articles About Fort Dodge Radio: Is This The Future of Local Radio? - Radio Ink

Bill Grady started his radio career in 1979 at the age of 18 working as an announcer at stations in Fort Dodge and Clarion, Iowa. His career quickly progressed and he became a radio station General Manager at the age of 23. Bill would later become Regional Manager for Sorenson Broadcasting in 1998, and for Waitt Radio in 2000 before starting his own media company in 2002.

During his career, Bill provided his leadership to many organizations.


Bill and his associates have earned many awards and recognitions

Professional Awards:
6 consecutive National Association of Broadcasters Awards for Excellence in Broadcasting
Sorenson Broadcasting Sales Department of the Year in 1996 and 1998

Bill was elected Chairman of the Sorenson Broadcasting’s Employee Stock Ownership Plan by the trustees in 1997 representing the financial interests of over 150 employees.

Bill founded his own company Star Communications in the summer of 2002 and has brought his advertising and marketing knowledge to thousands of small business owners in Iowa, Minnesota, South Dakota, Nebraska, Kansas, and Oklahoma. Star Communications is one of the pioneering companies in Iowa to provide audio on-demand services and programming.

Bill created MyFortDodge.com in 2007 and expanded with Fort Dodge Radio in 2019.

We'd Love to Hear From You!